“Even if Slow Food has a slow approach to food, young people must act fast to prevent further damage to agrobiodiversity.”

That’s the idea behind the formation of Slow Food Clubs in schools that involve the younger generations, as explained by Helen Nguya, the coordinator of the Slow Food gardens project for the Slow Food Lishe Convivium in Arusha, Tanzania.

Where does our food come from? How is it made? How is it connected to our culture and our identity? How can food be produced sustainably, with respect for the environment? These are some of the questions the students involved in the new school clubs in Arusha will be thinking about. 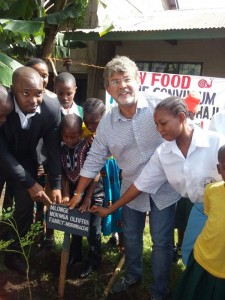 The clubs were officially launched on Saturday February 13 at the Faraja Vocational Training Center in the presence of around 200 people, including students from the region’s Slow Food school gardens along with their teachers, members of the Slow Food network in Tanzania and representatives of the local authorities. The guest of honor was Italy’s Ambassador to Tanzania, Luigi Scotto. “I admire Slow Food’s commendable commitment to defending biodiversity and people’s right to food sovereignty and their fight against the standardization of flavors, intensive agriculture and genetic manipulation,” he said. “I express my deepest appreciation and my gratitude for the launch of a project which, through schools, wants to promote the eco-sustainable production of food and educate young generations about better food consumption,” he continued, addressing the coordinators of the local Slow Food convivium.

The clubs are primarily educational in scope, with the aim of developing a new awareness about food choices in the young participants, promoting the consumption of local products and knowledge of native varieties. The club members will engage in sensory education workshops and cooking classes as well as food-growing activities. In fact the first ten clubs have been created in schools that already have a Slow Food garden.

“We need to document the value of local foods, produced according to the Slow principles of good, clean and fair, both for their health benefits and their economic returns. Only in this way can there be a change of direction,” said Lyne Ukio, the leader of the Lishe Convivium, which launched the initiative. 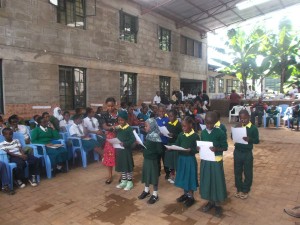 The role of Slow Food’s network of young people will be very important. “The impoverishment of biodiversity is not something we can put off: It’s already a reality that everyone can see. Young people must be united in order to prevent further damage,” said Reguli Damas Marandu, the Slow Food Youth Network coordinator in the Arusha area. The councilor for the local district authority concluded: “Young people are not only the generation of the future, but also the generation of the present, so they must act now.”

Any of the schools in the Arusha district can sign up for the program, and more than one club can be formed in each school. In order to join, all the school needs is students who are responsive to the values promoted by the Slow Food movement, curious to find out more about food and willing to get involved in a creative way. Each club will have a management committee that will decide on its activities, made up of six members (including a chair, a treasurer, a secretary and a coordinating teacher). The plan is for the clubs to be self-sustaining, with the students’ activities producing the resources for future initiatives.