Home » News » Waste not want not: getting the most out of each ingredient 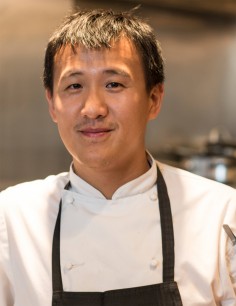 At the end of 2015 Canada announced the official launch of its Slow Food Chefs’ Alliance. At the time, Jack Chen was working alongside Dave Gunawan, one of the first members of the Alliance, and in early 2016, Jack joined the Alliance as well.

Jack is now the head chef at Royal Dinette, a restaurant located in the financial district of downtown Vancouver. Starting in October 2015, Royal Dinette began hosting dinners to raise awareness around the issue of food waste by transforming items that are often discarded into something special for the guests. Jack and Dave have always emphasized utilizing ingredients to their fullest potential to avoiding wasting them (and the money spent on them). However, they wanted to make the issue explicit to their guests, a central focus of the dining experience. What followed was a series of events they called the ‘Ugly Duckling Dinners.’ Five dinners were held over the course of seven months, each consisting of six to seven course on a fixed menu that included drink pairings. Jack acknowledged the dinners were “a bit of a hard sell. [To say,] ‘we’re going to sell you our garbage,’ sometimes people are put off, especially in Vancouver.” However, the dinners were well-attended and guests had positive feedback.

The decision to highlight the no-waste kitchen philosophy during these dinners was to spark a conversation with guests about the preconceived notions most consumers hold about unattractive produce and ingredients which are often automatically assumed to be inedible or undesirable and thus discarded. The events’ goal was achieved and guests spoke afterwards about how happily surprised they were by the menus. It changed their perceptions around ‘ugly’ food and also the usefulness of things like kale stems, potato skins, and off-cuts of meat that are often deemed to be without value.

Jack believes it is important to teach the importance of not wasting food to his cooks. The economic factor is critical, but equally important is valuing the work of the farmer and appreciating the resources that went into the product. This sort of connection between kitchen and farm is crucial if we are to truly respect the ingredients and extract everything possible from them when serving guests.