Today, George Njoroge Ngumba, president of the “Jedidia” young people’s group, which looks after the community garden in Kanjuiri, Kenya, tells us about his experience. 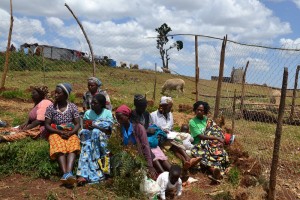 When was the Jedidia group set up and why?
We are 15 young people aged between 24 and 32, who live in the Kanjuiri refugee camp. The camp is home to 200 families who were displaced following the post-election violence in Kenya between 2007 and 2008. The Jedidia group was founded in 2012 and was set up as a platform for learning and exchanging ideas. Each of us has had physical and psychological problems due to the violence we were caught up in. Setting up a group seemed to us to be the best way to deal with our painful experiences and at the same time to help one another find sustainable solutions for the future.

Since the group was set up, what activities have you undertaken?
The first initiative we worked on together was a small revolving microcredit fund into which each member paid 60 Kenyan shillings per month (around 50 euro cents). After a year, this modest communal fund made it possible to start small projects to support ourselves, such as rearing chickens.
We then decided to rear sheep: these animals play a very important role because they help keep the land clear by grazing on weeds, as well as providing organic fertilizer for the small pieces of land that we cultivate alongside the tents we live in. We started by buying one and now each member of the group has two sheep.
In 2014, with the funds for young people allocated by the government, we undertook an agricultural project planting potatoes and vegetables: unfortunately the harvest wasn’t good because of poor rainfall.

What role does your Slow Food garden play?
In the Kanjuiri community garden we learn from each other and motivate one another, because we believe that there is strength in unity and that only united can we make progress. When we started, we grew a few varieties but, having become aware of the importance of preserving local biodiversity, we have started to introduce indigenous products that are in harmony with the surrounding environment.
Today, “sukuma wiki” (also known as Chepkilumnda, in the Ark of Taste), onions, spiderwisp (gynandropsis gynandra), amaranth, sweet potatoes, arrowroot, pumpkins, various kinds of beans, including cowpeas, black nightshade and rosemary are grown in the garden. 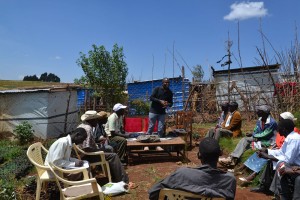 The Kanjuiri community garden is an example of a garden that was started in difficult circumstances. What drove you to create it?
Sharing common problems, all being Internally Displaced People, is something that unites us. Self-motivation is what guides us, spurred on by our common solidarity.
Another motivating factor was certainly involvement in the 10,000 gardens in Africa project. What we learned during the training made us understand how much we can do to make ourselves self-sufficient and ensure our own food security, without necessarily being dependent on government food aid. All the members of the group also cultivate small individual pieces of land to guarantee a secure food source for themselves, replicating their experience in the community garden.

What problems do you face, having chosen sustainable cultivation methods?
We face a number of challenges. The main challenge is variations in rainfall, which is also a consequence of climate change. In addition, although we have learned natural methods to combat pests, plant diseases are also a problem.

What are your plans for the future and what message would you like to give to young people like you?
As Internally Displaced People, our dream is to be able to buy land to divide between us equally, where we can produce food to sustain ourselves. We also plan to diversify production in our community garden to make it an open-air classroom, where we can educate the local community. We would like to be a model for other groups of young people. The message that we want to spread is that everyone has the right to food and that food is closely linked to the cultural roots of every community.