Situated to the northwest of the southern Austrian state of Carinthia, the Gailtal and Lesachtal Valleys are the first destinations in the world for Slow Food Travel.
The southernmost of the Austrian states, Carinthia is famous for its lakes and ski resorts, its woods and its facilities for mountain sports, from trekking to mountain biking.
In the Gailtal and Lesachtal Valleys, it is possible to discover old flour mills and learn to bake bread with heirloom cereals, find out more about the production of raw milk cheese (the Ark of Taste Geiltaler Almkäse), beer and Gailtal speck, to get to know the world of mountain apiculture, and to cook traditional dishes with local chefs.

Walking through the mountain pastures, visiting artisan workshops and taking part in hikes, you can enjoy in Alpe Adria – Carinthia a variety of different experiences: discovering the history and culture of the area, becoming familiar with the faces and hands of people who produce good, clean and fair food, and preparing and tasting traditional food products and dishes.
Small farmers, artisans, dairymen, master brewers, cooks, restaurateurs and hoteliers – all the leading players in the local network selected by Slow Food will take you on a journey to discover, places, skills and heirloom foods. 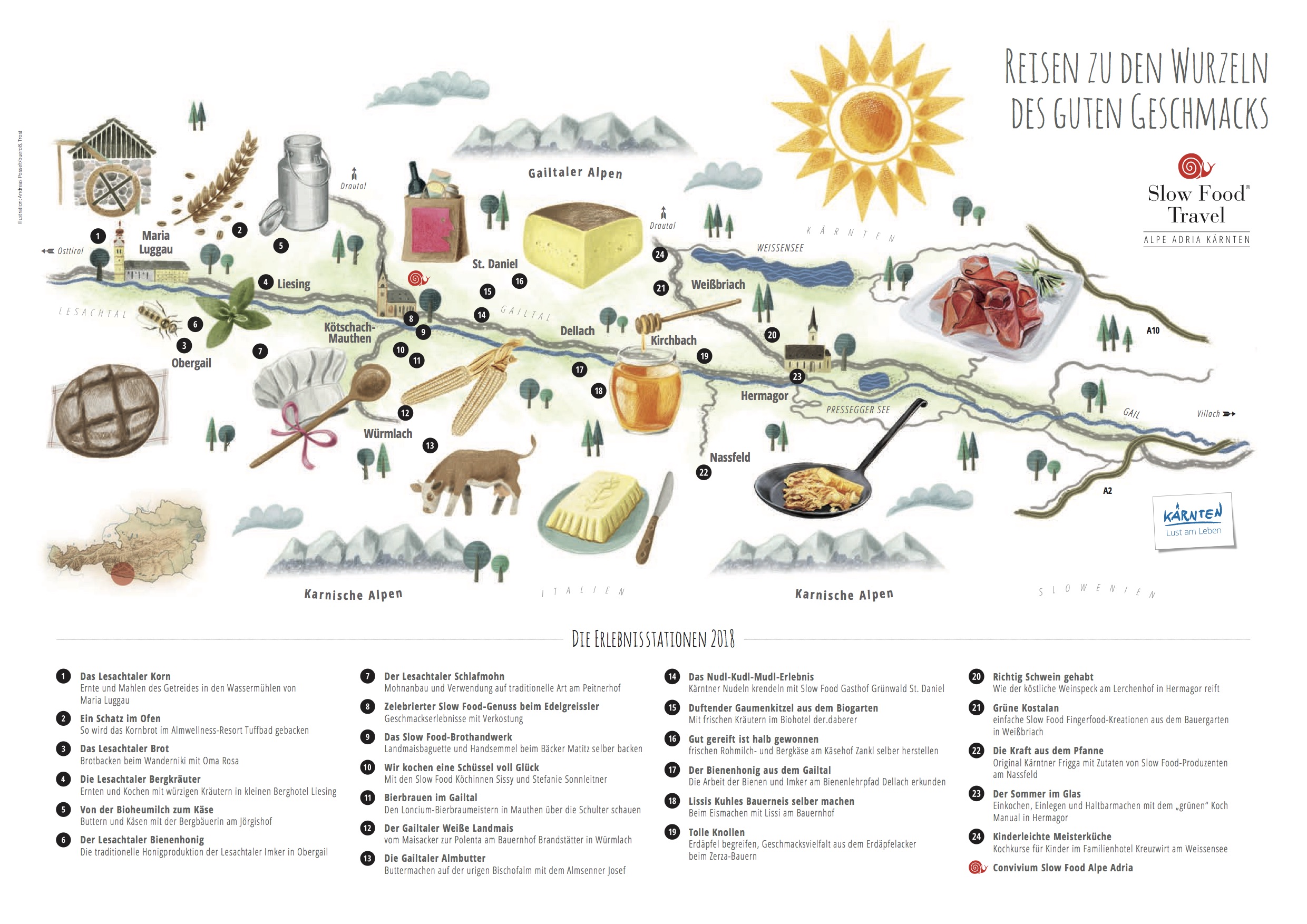 Want to learn how to cook Nudeln?

In Carinthia and Alpe Adria, Nudeln, similar to ravioli, constitute an ancient gastronomic tradition. It’s said that anyone who learns to prepare them has all it takes to get married, and there’s even a verb, Kredeln, to refer to the art of folding the pasta dough.
Nudeln are half-moon shaped with a braided edge and are traditionally served with butter.

The filling ingredients vary recipe by recipe. Nudeln can be filled with: ricotta and mint (Kärntner Nudel or Kasnudel); speck and Gailtal white maize; or meat, spinach, potatoes and mushrooms. Or they may be served as a dessert filled with dried pears (Kletzen). A smaller version, known as Schlickkrapferl, is filled with offal and herbs and cooked in stock. If you don’t know which to choose, restaurateurs serve Nudl-Kudl-Mudl, a tasting of all the various types.

Want to learn how to cook them?
GO TO WEBSITE

Want to find out more about Lesachtal bread production?

The Lesachtal Valley is known as the ‘valley of the thousand mills’ and boasts a long history of grain cultivation and grinding thanks to the steep rivers that fuel them. Not surprisingly, the bread-making tradition here has ancient origins.
Bread-making is so important and entrenched in the local culture it has been nominated a UNESCO masterpiece of the oral and intangible heritage of humanity.
Rosa Lanner has been baking authentic Lesachtal Valley bread for more than 30 years. Guests can join her to learn the art of preparing the dough for the bread, using the flour of heirloom local grain and rye varieties. The result is crisp fresh loaves which aspiring bakers can take home with local flour and the recipes to reproduce the bread in their own homes.

Organic raw milk cheese
The Zankl family are a perfect example of what Slow Food means when it talks about small artisan food producers guarding local areas.
In the small mountain village of Saint Daniel, Hubert, Barbara Zankl and her sons Lukas and Thomas, both now home from studying abroad, have a barn with ten cattle, which graze in the open in summer and feed on hay in the winter. Their small farm has been managed organically since the early 1980s and has been certified organic since 1989.

The Zankls produce two types of raw milk cheese: Bergkäse, which matures longer, and a fresh cream cheese flavored with herbs picked in the surrounding woods and in the family garden.

Lukas and Thomas have introduced a number of innovations and added a Camembert-style cheese – fresh and matured for a few months – to the product range.

It is possible to visit the farm, see how the cheeses are made, taste the different varieties and take the ones made during the workshop and the mature ones prepared by the skilled hands of Barbara Zankl home as a souvenir.