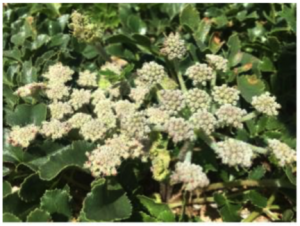 With the addition of Gaetbangpung, a rare coastal plant used as food and medicine, South Korea becomes the 11thcountry with at least 100 products on the Ark of Taste.

Slow Food South Korea is proud to announce its 100thproduct on board of the Ark of Taste*: Gaetbangpung (Glehnia littoralis) is a plant in the carrot family whose roots have anti-inflammatory, antioxidant, anticarcinogenic, and antiviral properties. Gaetbangpung is only found in a few places, one of which is Bongsan-ri, a village in Uljin County on Korea’s west coast.

Bongsan-ri has no natural harbor, so agriculture is more important than fishing for the village economy. About 25 households grow gaetbangpung in small plots at the top of the beach, for domestic consumption or to sell in the local traditional market. Roots are harvested from plants at least 3 years old, dried, and used locally or sold to herbalists. They are sliced and boiled with other herbs to make a medicinal juice. The leaves are used as a culinary herb, either fresh or dried, in salads or mixed with rice dishes, etc.

Glehnia littoralis has been used in traditional Chinese, Japanese, and Korean medicine for centuries. Wind is closely associated with various ailments in traditional East Asian medicine, especially sudden episodes such as heart attack and stroke, and bangpung means both “shutting out the wind” and “preventing a stroke.” In Korea, gaetbangpung is a traditional remedy or preventive medicine for cough, high blood pressure, fever, pain, and neuralgia, in addition to stroke.

This speciesis rare throughout its range because of habitat degradation due to tourism and the construction of roads and breakwaters. In places where tourists know about the medicinal value of the plant, they often harvest it irresponsibly. In addition, while the seeds of wild Glehnia littoralis are dispersed by seawater, cultivated Glehnia littoralisis never inundated by high tides, so the seeds become less viable and less genetically diverse over time. It is therefore crucial to protect this plant in its wild state. Efforts are underway in Bongsan-ri to preserve spontaneous patches of gaetbangpung.

Though gaetbangpung can be cultivated in regular garden plots, it grows better on exposed dunes, and locals say that gaetbangpung from the dunes tastes much better than that grown near the house. Unfortunately, because most residents of the village are elderly, the management of gaetbangpung may not continue into the future. Slow Food has listed gaetbangpung on the Ark of Taste to draw attention to the importance of conserving wild populations and to promote the traditional use of this fascinating medicinal and culinary herb.

* Created in 1996, the Ark of Taste is a catalogue of forgotten and endangered quality food products that belong to the cultures, history, and traditions of the entire planet. The Ark registers the products in various categories—animal breeds, fruits, vegetables, cheeses, etc.—offering a unique resource for those interested in sourcing, promoting, and protecting quality foods.