Travelling southeast from Freetown, Sierra Leone’s capital, towards the eastern provinces, eventually brings you to the unpaved roads that lead to the Gola Rainforest National Park, one of the few remaining tracts of rainforest left in the country. Rivers and streams alternate with villages whose huts are roofed with straw or brightly painted corrugated metal, along with rice paddies, oil and coconut palm plantations and cacao and coffee plants growing in the shade of kola nut, mango and cashew trees.

This precious yet difficult land was not only the epicenter of the civil war that lasted from 1991 to 2002, but also one of the areas worst hit by the Ebola virus 12 years later. Only a small fraction of this primary forest remains: 80% has been damaged by illegal mining, unauthorized logging and large-scale agriculture.

Many associations are working here to save this invaluable ecosystem, including Slow Food. Food communities, food gardens, Ark of Taste products, convivia and the Kenema Kola Nut Presidium (which for several years has been supplying Piedmontese brewers Baladin with nuts for their cola) all involve a network of farmers and citizens who want to make sure communities have access to good, clean and fair food.

“Kola is very important to us, it’s a symbol of friendship, welcome and love. According to a regional adaptation of the Koran, kola nuts were sent to Earth by God himself,” Mustapha tells me. He’s a volunteer teacher in the Kailahun district and a member of the kola producers’ association. “Historically they were worth the same as gold and still today they are always on hand during ceremonies, reconciliations or to mark an agreement. During Ramadan, for example, we prepare a special drink made from kola, ginger, pepper and sugar.” 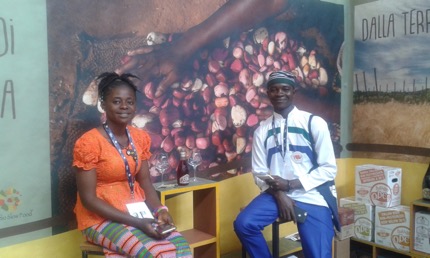 The cultivation of kola is traditionally linked to the indigenous Mende and Gola peoples and the nuts are primarily used in energy-giving beverages, as traditional medicine and to dye textiles.

Renowned for their exceptional flavor and texture, thanks to Slow Food’s work the Presidium kola nuts are now sought-after nationally. It was with a glass of a traditional kola drink that visitors were welcomed to Slow Food Sierra Leone’s stand at the national Agriculture Trade Fair in Kenema last December. “It was a great opportunity to come together, and good for the visibility of the Slow Food network in Sierra Leone,” recalls Patrick Abu Mansaray, the national Slow Food coordinator and president of the association. “It was a chance to exchange opinions with other farmers and traders and to make contacts for participating in other fairs in the future.”

The effects of climate change, which have been intensifying over the past few years, have reduced and delayed the kola harvest, but working with Slow Food means at least the producers have been able to enter into partnerships with national organizations and take part in new events.

“It’s mostly the women who bring the kola nuts from the forest or the community gardens to the village where they will be processed,” explains Fatmata Mansaray, the Presidium’s treasurer and bookkeeper. “They’re responsible for the processing phase and are often in charge of selling the product to buyers, who come from surrounding regions but also from Mali, Guinea and Liberia.” The Kenema Kola Nut Presidium currently involves over 200 producers and farmers from three different Slow Food convivia, who joined together in 2012 to create a single company in order to boost production, develop kola-nut processing techniques and obtain a better price on the market thanks to improved quality.

Women also play key roles in the area’s farming communities. For example, in one of the convivia, in Gegbwema, the town chief is a woman and also a member of the kola producers’ association, while Aminata Amara from the Madina Convivium in the Kailahun district is a Slow Food member as well as the coordinator of a large food garden close to the village of Pejewa, named after her family. 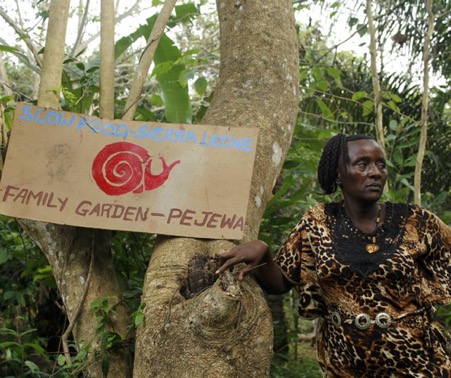 Aminata coordinates around 20 people who cultivate the garden plot, which is surrounded by rice paddies and palm plantations. Thinking about future generations, Aminata says: “The production of kola will continue to be of benefit if we parents pass the culture of the land onto our children. With the money we make from selling the nuts we can pay their school fees and even when the kola crop is down we can rely on the garden’s other produce. If we teach our children the right way to make the plants grow and to process the kola nuts, they will undoubtedly have more opportunities to make a living when they grow up.”

She concludes with a message of hope for the future: “Even when we are no longer here, our children will know what to do.”

Written in collaboration with Rachele Villa

Slow Food collaborator in Sierra Leone and author of the anthropological thesis “In the Eastern Provinces of Sierra Leone: Dynamics of Conservation and Cooperation on the territory”