Manvester Ackson Khoza is a Slow Food member and coordinator of the gardens in his country, Malawi. Today he tells us about the growing network. 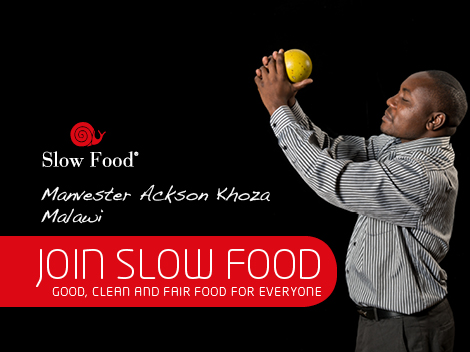 In landlocked Malawi, the primary economic activity is agriculture. The population is around 16 million, and 80% of people work in the fields. Agriculture also makes a significant contribution to the country’s GDP. But the introduction of hybrid varieties is weakening the traditional local crops and cultivation systems. The traditions of the many ethnic groups who still practice organic subsistence agriculture, like the Tumbuka, Chewa, Yao, Ngonde and Sena, are particularly at risk.

This is why the 10,000 Gardens in Africa project has particular relevance in Malawi: It means giving a voice to the country’s small-scale farmers and strengthening their position in this important economic sector.

One of the project’s leaders is 36-year-old Manvester Ackson Khoza, the national coordinator for Slow Food in Malawi since 2014. Manvester was born in the outskirts of the village of Mantchewe, in the district of Rumphi, the fifth of eight children. An accountancy graduate, he is currently enrolled in the three-year course in Managerial Economics and Entrepreneurship at the University of Malawi. Manvester joined the Slow Food network in 2011, thanks to Mazoe Darline Gondwe, who at the time was coordinating the 10,000 Gardens in Africa project in the country. He began participating with great enthusiasm, starting 12 new school gardens in the Lura area and establishing the first of a series of convivia in the country in 2012.

“The Slow Food network in Malawi is expanding very quickly,” Manvester told us. “Different organizations and institutions support the association’s philosophy, including the NGO Find Your Feet, the Ministry for Agricultural Policies and Food Security, the Ministry of Health and the NGO Future Vision/Matunkha. To date, there are 47 school gardens and 11 community gardens between the districts of Rumphi and Mzimba, in the northern part of the country. But the project is also extending to the central and southern districts, like Slaima, Zomba and Chikwawa. Almost 300 people, of which 80 are paid, work to protect and promote local biodiversity, including organizing events like Terra Madre Day, with the participation of many NGOs and local communities. The Ark of Taste project is also making progress: so far we have three products on board, msongolo, bizare and chisavu [chinaka].”

Slow Food International Vice President Edward Mukiibi visited Slow Food members in Malawi in 2014. He expressed his appreciation for the important work being carried out in the country and called attention to some foods that could become Presidia, such as the local goats and chickens and Lake Malawi’s unique Chambo fish (Oreochromis karongae).

Collaboration and enthusiasm are driving the burgeoning Slow Food movement in Malawi. Only if all the convivium leaders, association members and supporters, farmers and food producers work together will it be possible to create a strong Slow Food network in the country.