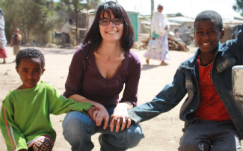 Born in Cuneo in 1970, Serena Milano is Secretary-General of the Slow Food Foundation. With a degree in modern literature from the Faculty of Literature and Philosophy at the University of Turin, for several years she was editor of local weekly and bimonthly political publications.

Since 1997, she has worked at Slow Food’s international headquarters. In the first few years she worked as editor of Slow Food publications: guides (including Osterie d’Italia), recipe books and books on traditional products (including Atlante dei prodotti tipici dei parchi italiani).

Since 2000, she has managed the Presidia project (supporting small-scale food producers) and in 2008 became Secretary-General of the Slow Food Foundation. Over the years she has devoted particular energy to the development of the Slow Food network and projects in Africa.