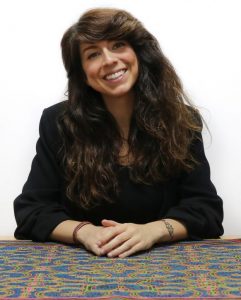 Born in 1989, Gaia Salvatori grew up in the Lazio countryside, where the genuine ingredients and rural traditions shaped her growing interests.

After graduating with a degree in communications, she completed her studies with a specialist qualification in marketing. It was while at university that she first got involved with Slow Food, falling irreversibly in love with the movement. She saw the values she had learned as a child reflected in the association and soon became an active member of the Roman committee, participating in the formation of the Slow Food Rome youth group.

Her interest in cultural diversity and rural agriculture led her beyond Italy’s borders, to Argentina, for her degree thesis on typical foods; to Chile, where she worked with the Slow Food network, producers and indigenous communities on the development of Earth Markets, Presidia promotion and the school gardens project; and to Peru, where she oversaw a conservation project in one of the most biodiverse parts of the world, the Amazon jungle. Since July 2018 she has been the youngest member of Slow Food Italy’s Executive Committee.