The soil is life, health and biodiversity—so let’s save it

After the oceans, the soil represents the planet’s largest carbon stock and a third of all living species are to be found under its surface. It’s a shared heritage, and it’s at risk in many countries.

The land provides all the nutrients and water we need to produce food. It filters rainwater and recirculates it, making it clean and drinkable, and it regulates the climate.

It takes thousands of years to create a few centimeters of fertile soil, but only a few decades to destroy it, and it isn’t always possible to recover its structure and fertility. If soil is lifeless and unhealthy, it’s impossible to produce wholesome food.

Only half of what we call soil is composed of minerals such as sand and clay. About 20% is water and another 20% air. The remaining 5-10% is roots, organic matter and tiny living organisms. The large numbers of living beings present in the terrain break up the soil, decompose organic matter, favor plant nutrition and release nitrogen. They restore humus and simple mineral substances fundamental for fertility and encourage the formation of soft, porous turf resistant to the effects of water, wind and mechanical operations. Fertility is closely connected to the presence of organic matter in the soil. Soil that contains less than 2%—as is often the case in western countries—can be considered degraded. 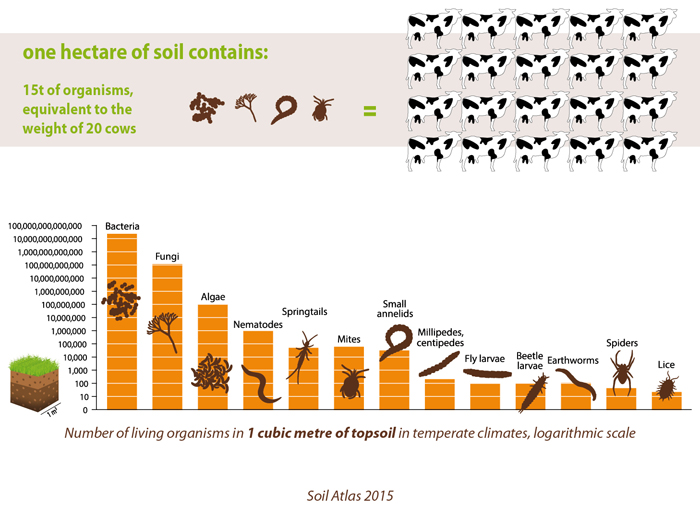 The world’s soil is at risk for many reasons:

The Industrialization of Agriculture

After both world wars, the armaments industry was converted for the production of synthetic fertilizers and pesticides, which impoverished soils and drastically reduced their organic matter, and therefore, their fertility.

Chemical fertilizers, high-yield seeds, pesticides, herbicides and monocultures have tripled agricultural production, while providing only a modest increase in cultivated land (+12%), but they have also heavily compromised biodiversity, both in terms of the microorganisms in the soil and the crops grown in it.

Excessive irrigation has caused salinization (an increase in salt) in many terrains, harming not only natural vegetation but also the microorganisms in the soil and the entire water cycle that takes place within it.

The surfeit of agrochemical substances (chemical fertilizers, herbicides, pesticides) has had dire repercussions on the natural balance of microorganisms in the soil, while the compaction caused by heavy machinery has damaged its structure and reduced its biodiversity. 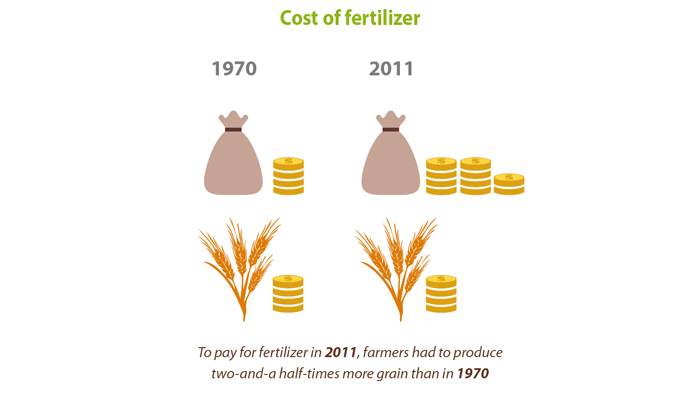 Whether directly or indirectly, ninety-five per cent of the world’s food comes from the soil. If the demand for agricultural produce were to continue at its present rate, in 2050 the earth would need an extra area of land the size of Brazil and India put together to continue feeding us all, and the political and social tensions that have come to the surface in recent years would be further aggravated. Yet, according to the FAO, the sustainable management of farm land could increase food production by up to 58%.

Erosion is the removal of the surface of the land by water and the wind. By erasing part of the stratum of the soil (only a few tens of centimeters in depth) in which organic matter is concentrated, we reduce its fertility, often irreversibly. Erosion leads to landslides, landslips and, ultimately, desertification.

The causes of erosion may be poor land management (the stripping of land for agricultural purposes, overgrazing) or natural events resulting from climate change, such as floods and fires.

Deforestation is one of the biggest contributers to soil erosion: every year 7.3 million hectares of forest are cut down—an area the size of Panama—especially in tropical regions (e.g. Indonesia, Brazil, Thailand, Congo). Deforestation accounts for 6 to 12% of carbon dioxide emissions into the atmosphere.

In Europe, 105 million hectares of land are affected by erosion, the equivalent of 16% of the continent’s entire surface area.

Urbanization is a practically irreversible process that destroys the soil’s functions for good. It’s caused not only by the growing sprawl of towns and cities, but by the construction of infrastructure such as roads and railways. As a whole, the phenomenon may also be called “impermeabilization” or waterproofing, as it stops water from reaching the soil beneath concrete or other manmade materials.

Between 1990 and 2006, over 15,000km² (an area bigger than Northern Ireland) of land was impermeabilized. If this trend continues, within a century we will have lost an area the size of Hungary.

Chemical or radioactive waste discharged in illegal dumps, extraction residue disposed of incorrectly and earth-moving activities for mining all pollute or damage the structure of the terrain and the equilibria of the microfauna inside it.

Every year, about 200,000 cubic meters of radioactive waste are produced worldwide and the trend is growing constantly.

The soil and the climate

The planet’s soil captures more carbon (which is responsible for global warming) than all the rest of its atmosphere and its vegetation. Human activity—such as deep plowing or the overuse of nitrogen-based fertilizers—facilitates the release of this carbon, increasing the quantity of greenhouse gases in the atmosphere, and therefore, global temperatures.

In a downward spiral of cause-and-effect, the extreme events generated by climate change (drought, flooding and so on) further worsen the conditions of the soil.

How can soil fertility be maintained?

By making a productive paradigm shift. The soil is a complex living ecosystem whose balance has to be preserved. We cannot afford to continue trying to maximize agricultural yields with industrial methods. The long-term productivity of the soil can only be guaranteed through the adoption of agro-ecological practices that: 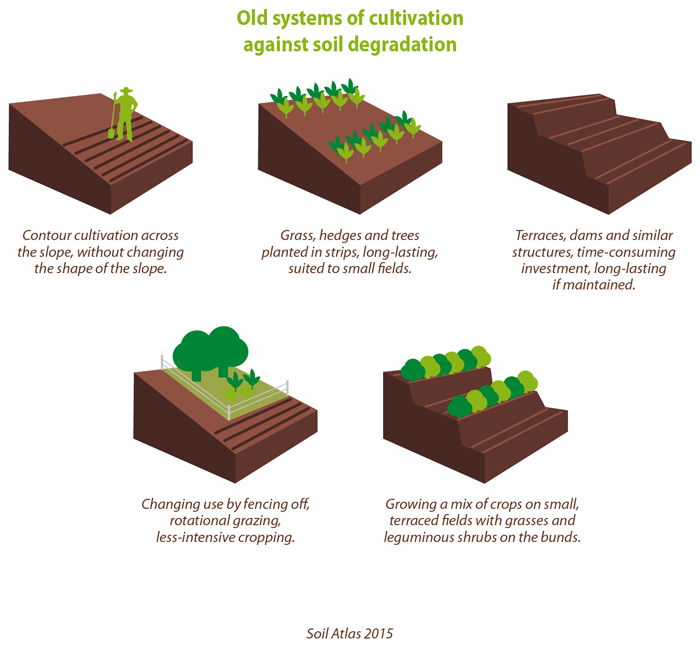