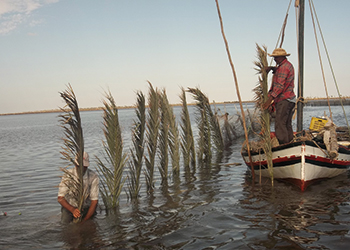 h the Kerkennah Islands Traditional Fishing Presidium in Tunisia on December 9, a project funded by the Lighthouse Foundation. Kerkennah is a small archipelago of ten islands in the Gulf of Gabes, not far from the city of Sfax. The gulf is known as the “nursery of the Mediterranean” because of the underwater meadows of Posidonia seagrass that make it a perfect habitat for fish reproduction.

The Ouled Ezzedine fisherman practice artisanal fishing, based on ancient tools and the communal management of resources:

The aim of the Presidium, which currently involves five fishermen, is to raise awareness among other fishers and the rest of the island’s population about the importance of preserving artisanal fishing and valuing local gastronomy. With the creation of the Presidium, this group of artisanal fishers is committed to using traditional fishing methods and integrating fishing with agriculture; they also tend to the date palms that represent a key element of the island ecosystem. Now the date palm is under threat, replaced by more profitable crops like olives. Date palm leaves, traditionally used for producing fishing equipment, are gradually being replaced by plastic, as are other materials found on the island (terracotta, alfalfa).

Thanks to the Presidium, the tradition of collectively repairing the charfia has been re-established: every summer the community organizes a charfia festival, during which the men get in the sea and align the palm fronds that make up the charfia structure, while the women prepare delicious local dishes like fish soup and barley couscous with octopus.

Everyone who tries fish caught in a charfia agrees that it is tastier, because the fish waits calmly, unwounded, until the fishermen come along to catch them.

The Kerkennah Islands Traditional Fishing Presidium is the second Presidium in Tunisia, after the Lansarin and Gaffaya Ancient Durum Wheat Varieties Presidium. Tunisia has 22 products on board of the Ark of Taste and 30 gardens as part of the 10,000 Gardens in Africa project.