For the Ogiek people, honey was the main source of food during droughts, famines, and other calamities because it could be preserved for a long time.

Apart from being a staple food, honey played a key role in various Ogiek cultural practices: It was traded with neighboring communities and was also used for bridewealth payment (at least one debe, or 30-kg container, had to be given to the bride’s family). Honey was so precious that only certain people could handle it, and when it came to new beehives, a person had to prove that he/she was pure of heart and would not negatively affect the hives or honey.

Home to about 35,000 members of the Ogiek community, the Mau Forest has been subjected to systematic degradation and destruction since the early 1900s when the English exploited it for wood to power their steam engines. Since the 1980’s, the destruction of the Mau Forest for tea and flower plantations, coal mining, and forestry has become increasingly widespread. In the last 20 years, 60% of the forest has been cut.

The Ogiek Honey Slow Food Presidium was launched to protect the Mau Forest ecosystem and promote the value of the Ogiek people’s ancestral culture through honey, their most important product. The Macodev (Mariashoni Community Development) cooperative, a community-based organization that brings together 12 groups of beekeepers, is working to increase production volumes, differentiate the various types of honey produced, improve packaging, and promote the honey in shops, restaurants, and hotels. 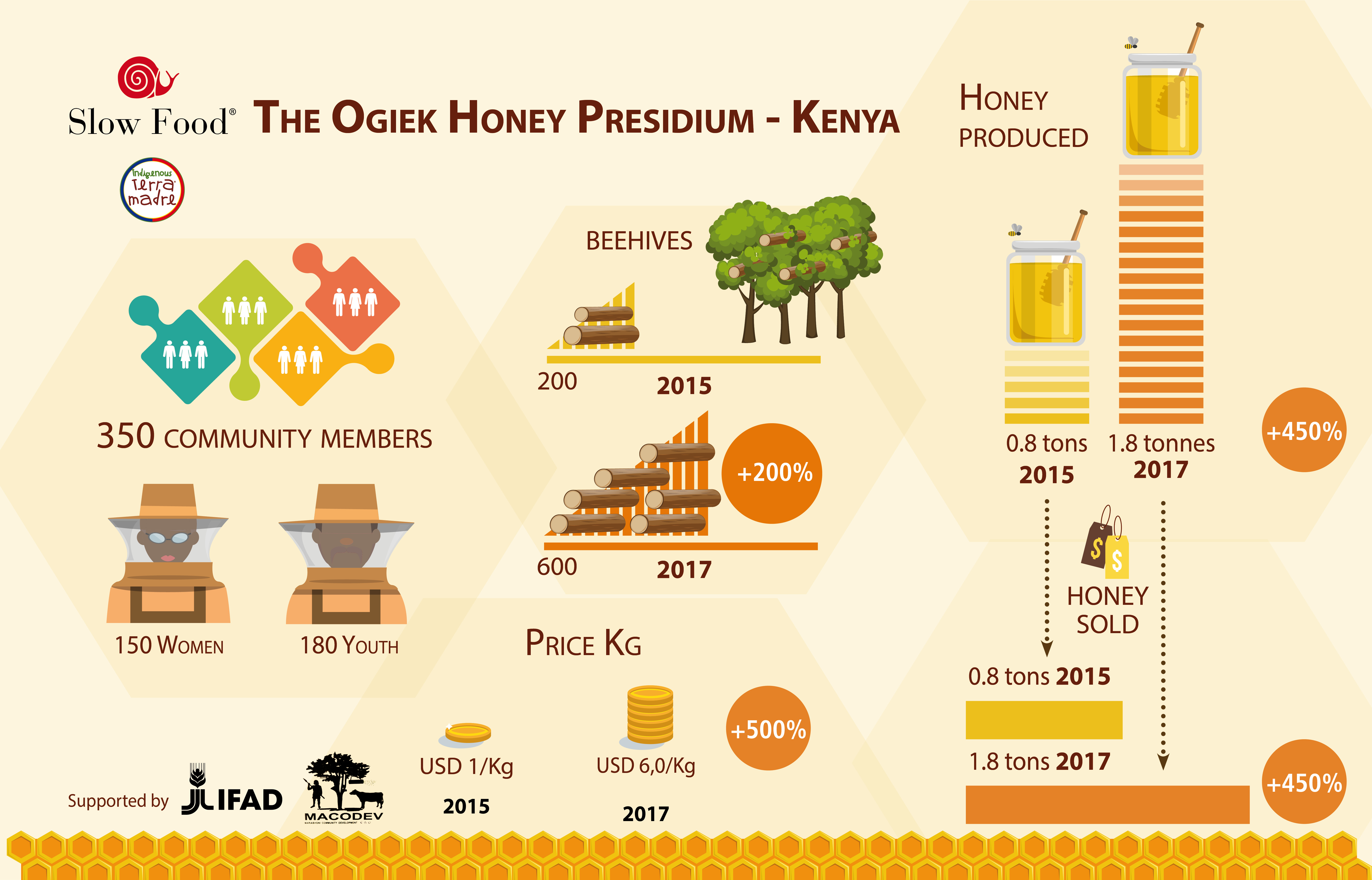 What are the main changes that have taken place since the Presidium was launched?
Before the Presidium was started in 2015, honey was mainly produced for household consumption and exchange with the neighbors, with only a small quantity sold. The formation of the Macodev cooperative has therefore played a critical role in improving the quantity and quality of the honey produced. The number of beehives has increased from 200 in 2015 to 600 at the end of 2017. This has led to an increase in the quantity of honey produced and, due to improved quality, the prices of the honey rose from 100 Kenyan shillings to KES 179 per kilogram between 2015 and 2017. The honey is currently sold in shops and a supermarket in the nearby towns of Elburgon, Molo, and Nakuru. In addition, the Presidium has witnessed increased participation of women in the beekeeping activities.

What is the importance of honey for the indigenous community? Can you tell us about some of the cultural practices in which honey is involved?
The Ogiek way of life is based on natural resources provided by the forest—they are hunter- gatherers whose main activity is apiculture, but some also grow crops and raise animals. The forest was a shared resource and each clan was allocated a section of the forest to manage sustainably and therefore benefit from its resources. At one time, beekeeping was carried out exclusively by men, particularly the community elders, who were entrusted with constructing the hives and harvesting honey without damaging the trees. Young men accompanied their fathers to the apiaries in order to learn the traditional practices, which ensured that knowledge related to beekeeping was passed down from generation to generation. Part of a young man’s initiation involved climbing the trees to retrieve honey and withstanding the stinging of the bees. 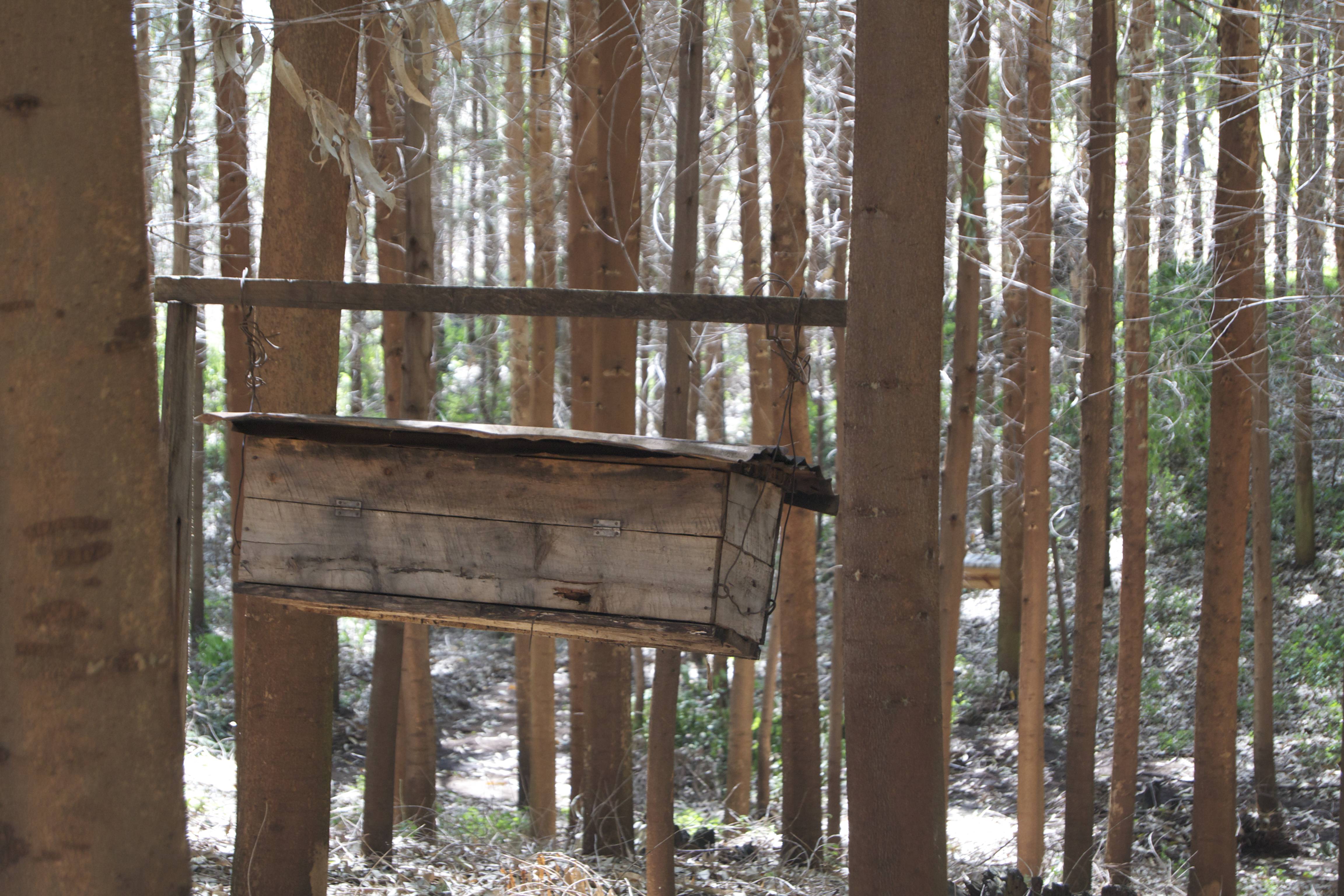 Traditional wine was also made from pure raw honey and a fruit known as rotonik, which comes from a tree (Kigelia africana) that is community known as “sausage tree” due to the shape of its fruits. The drink was used during social events, meetings, and initiation ceremonies. After a woman had a baby, her husband had to wait 4 days to see the newborn. During the 4 days, he prepared the honey wine that would be drunk with the community during the official presentation of the child. Whenever there were conflicts, meetings were held to find a solution and honey wine was consumed to symbolize the union of the community. The wine was also used during rituals that were held during calamities like floods, drought, and lightening.

How has the Presidium helped in preserving the Mau Forest ecosystem?
Through the Presidium, the community has increased efforts to protect the Mau Forest as their ancestral home and to promote their traditional beekeeping practices, with most of the groups’ members joining the Community Forest Associations (CFAs). Honey producers have taken part in planting native trees to counter the introduction of exotic trees to the forest, which threaten the future of unique the local honey. Moreover, since 2015, the Ogiek community has taken part in responsible tourism initiatives in collaboration with the Slow Food Foundation for Biodiversity and NECOFA (the Network for Ecofarming in Africa). In addition, the community recently won an 8-year legal battle (defending their right to live in the forest) that was itself a continuation of other legal battles that date back to the colonial era in the 1930s when the Ogiek people were exterminated and driven from their ancestral lands to make room for colonial settlers. The creation of forest reserves has also kept the Ogiek from being able to access their land. The British failed to recognize the Ogiek as a tribe, which would have entitled them to land. 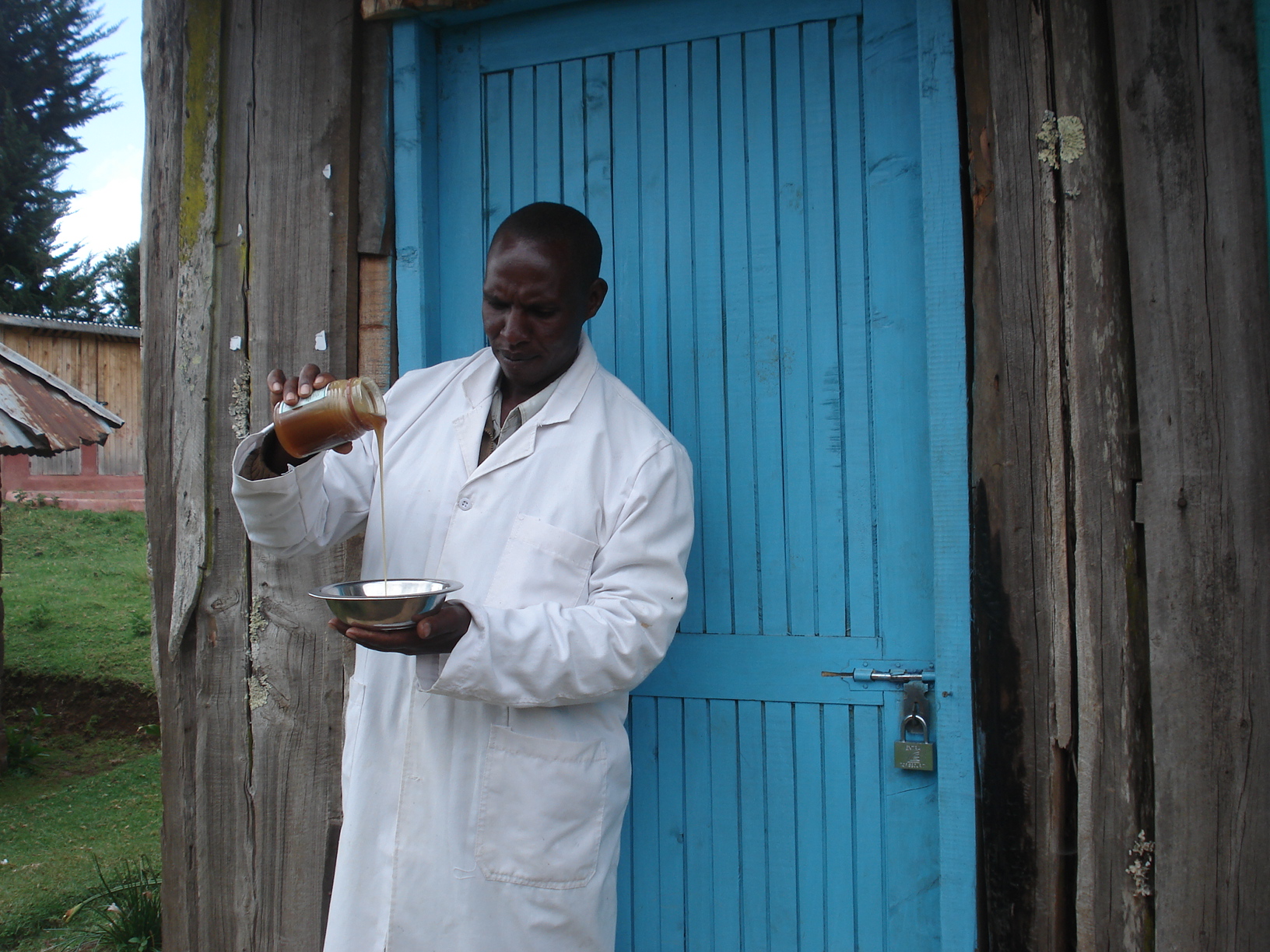 Why is resistance through food important in the Ogiek community today?
Several changes have taken place within the Ogiek community due to continued interaction with members of other tribes, including Kikuyu and Kipsigis herders. Some members of the Ogiek community have started changing their traditional way of life by adopting cattle rearing, agriculture, and other economic activities. The interaction with the outside world also contributed significantly to the disruption of the forest ecosystem and therefore to the Ogieks’ home. Promoting beekeeping not only contributes to the preservation of the forest; it is also an important economic activity for Ogiek youth and their communities, and can help to lift them out of poverty.

The Ogiek Honey Slow Food Presidium is supported by IFAD (the International Fund for Agricultural Development) thanks to a project that seeks to empower indigenous youth and their communities to defend and promote their food heritage.