May 10 is the International day of the Argania

“The smell of toasted argan kernels takes me back to my childhood, when at the end of the week I would sit by my grandmother and we would prepare the oil for the following week,” recalls Hafida El Hantati, vice-president of Ajddigue, a cooperative of argan-oil-producing women located close to Essaouira, Morocco.

Her experience is not unique: for many people here, argan is like a childhood friend who stays with them throughout their lives.

The argan tree (Argania spinosa) has existed for 80 million years, growing only in an arid, mountainous area in southwest Morocco. This magical place is surrounded by mountains but still offers glimpses of the distant Atlantic Ocean. Men stand along the single winding road that passes through here, selling the argan products that have been carefully prepared by the women of the community. 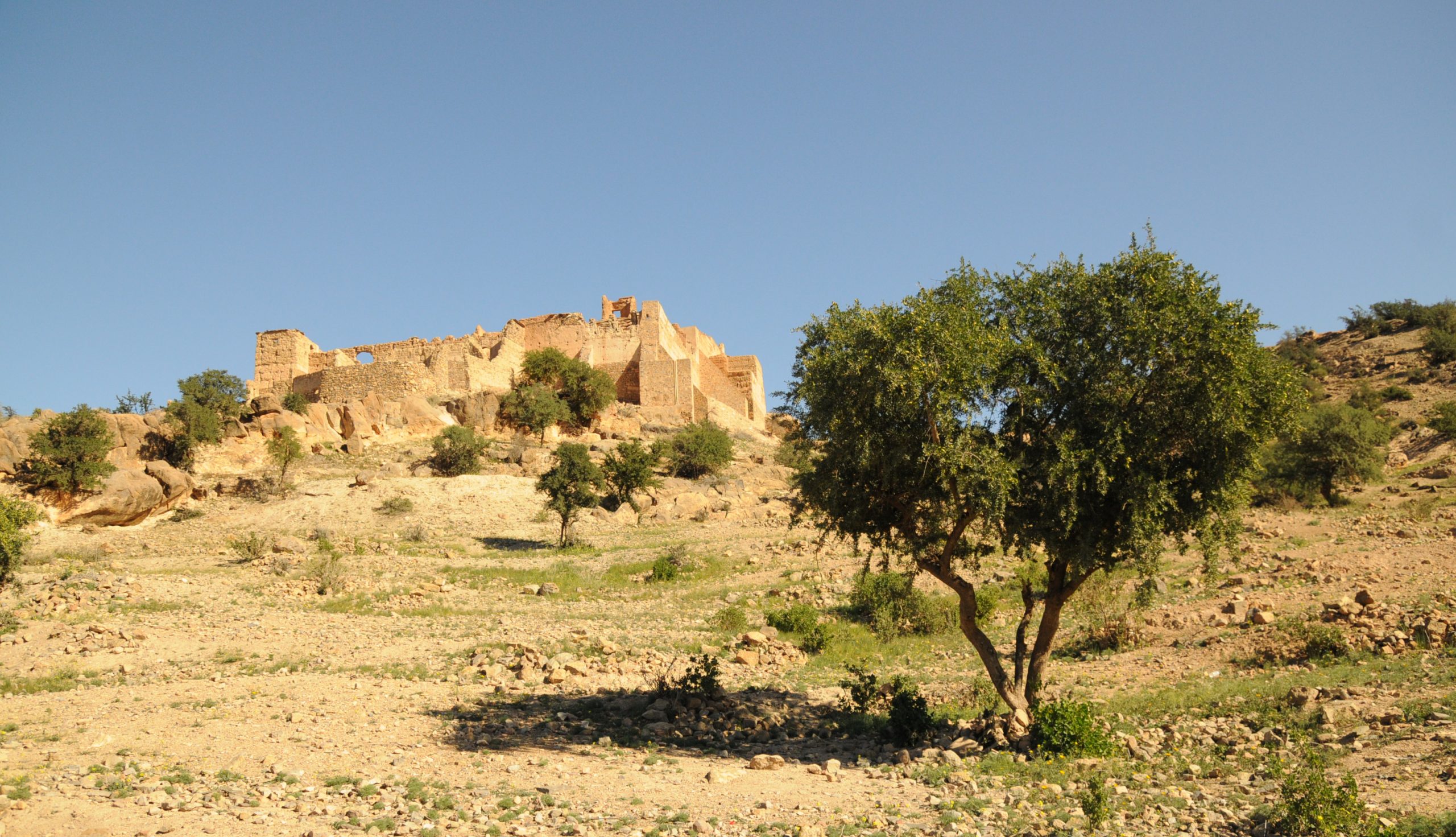 An ancestral technique passed down from woman to woman

In the local tradition, argan is the domain of women. They are the ones who gather the aafiush, the fresh argan, which laid out to dry on clay terraces becomes aqqain. At this point, the oldest woman in the family removes the first layer of the fruit, a soft skin that comes away easily, to obtain the irgan, a hard, smooth nut. Then it is the turn of the youngest in the family to do the trickiest job, opening the irgan to extract the tsein, the soft, white inner kernel, which is next roasted over a fire. The “middle” woman, the strongest, will be responsible for grinding the tsein until it becomes a thick brown paste, then using water to separate the oil. It takes two hours of mixing and 35 kilos of aafiush to obtain 1 liter of oil. Nothing from the process is wasted: The skins are fed to animals and the crushed kernels become an excellent masque for skin and hair. 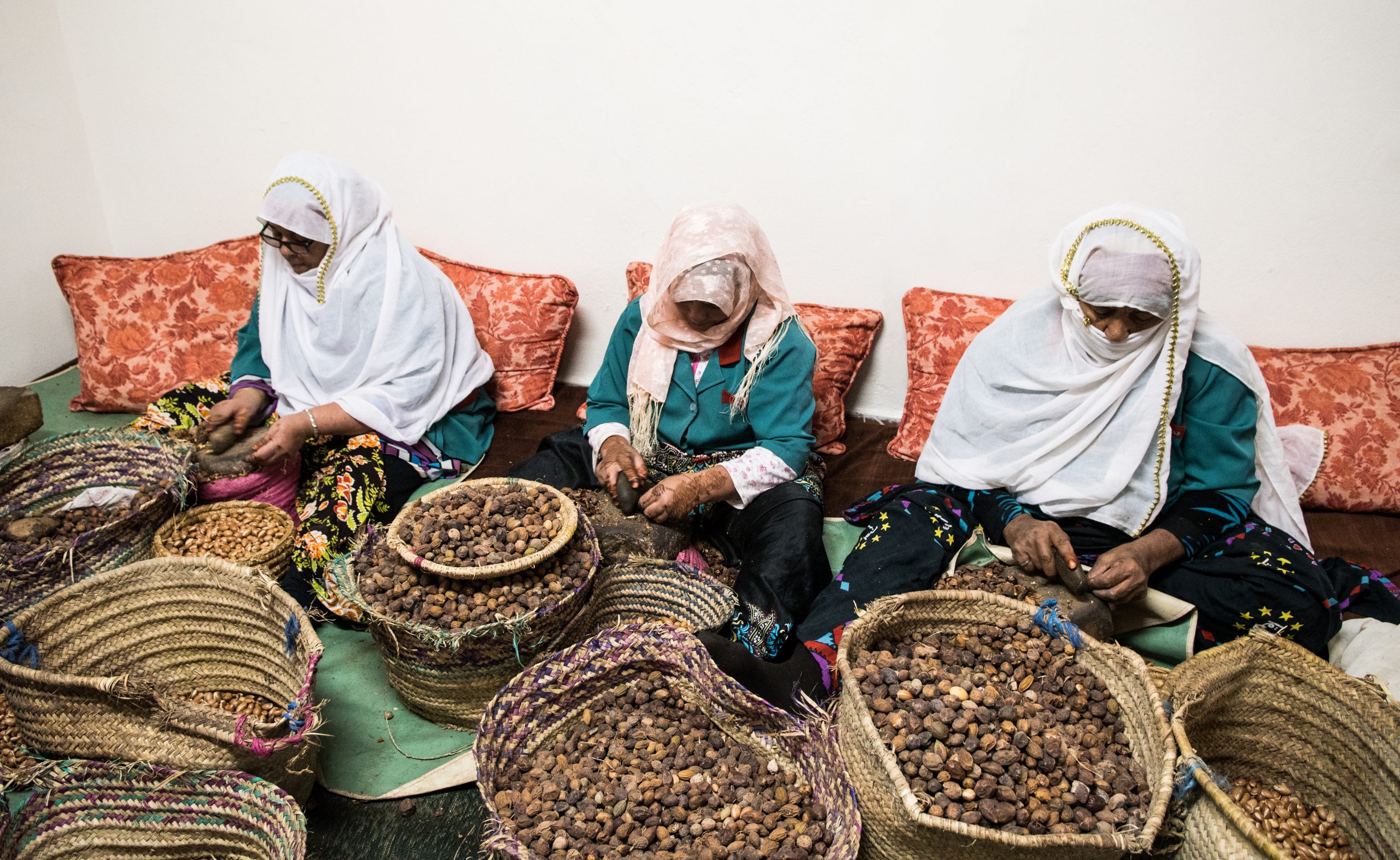 An elixir for a long, healthy life 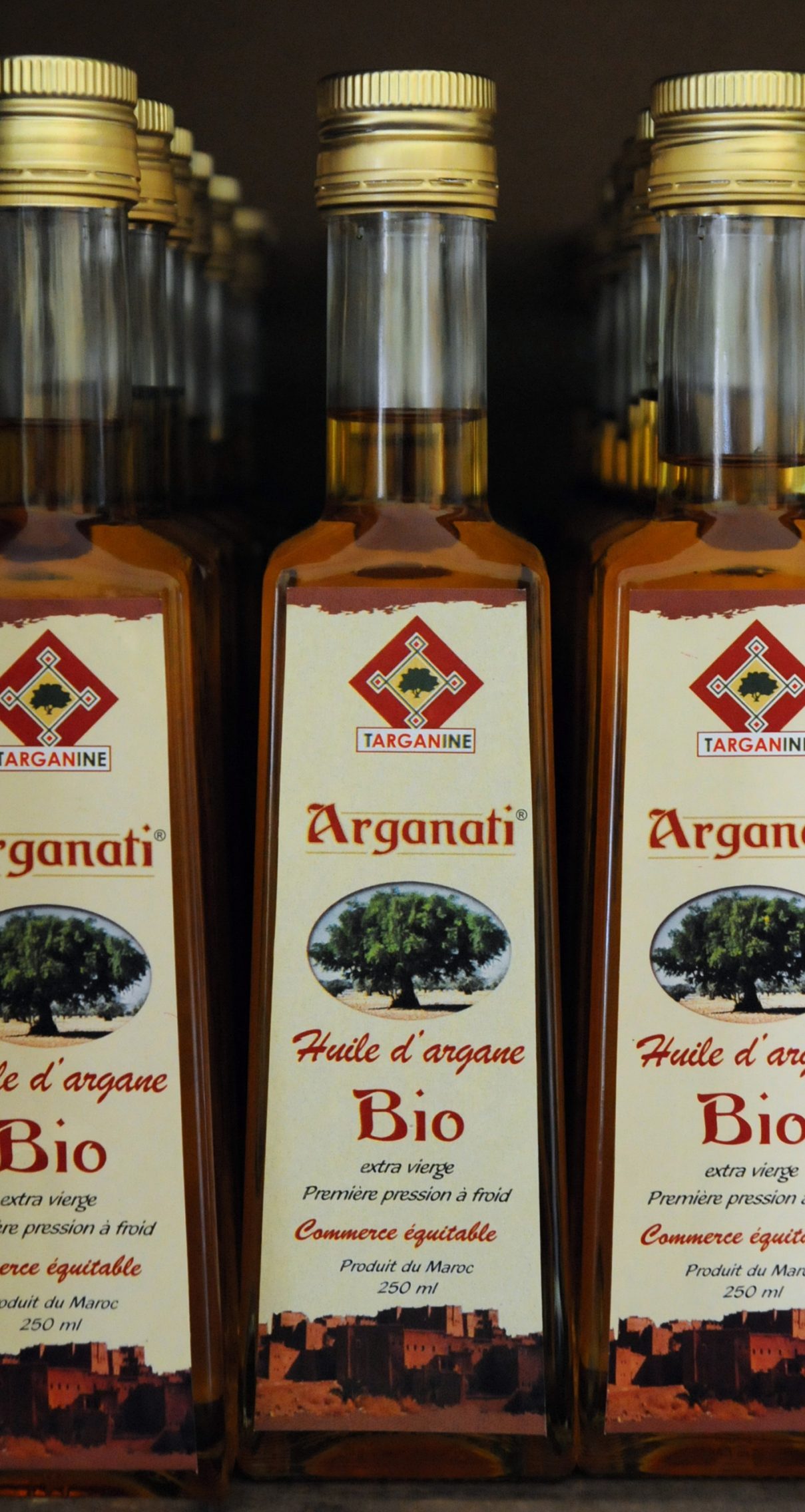 Argan oil is little used for cosmetic purposes in this part of the world, as it is considered more of a food. While cosmetic oil is obtained from the raw kernels, the edible oil is pressed from the kernels after toasting, giving it its characteristic hazelnut flavor. According to the locals, consuming argan oil contributes to a long and healthy life, a belief confirmed by its high concentration of vitamin E and cancer-fighting properties. While the benefits of the edible oil might be less well-known than those of the cosmetic oil, they are no less powerful.

Sadly, in the 1970s and ’80s the oil was gradually replaced in the kitchen by other, cheaper vegetable oils, potentially harmful to human health and ecosystems, like soy, corn and palm oil. These days, even though argan oil maintains its central role in the local culture, it is saved for special occasions.

Over the last ten years, argan for cosmetic use has been heavily commercially developed for export and demand for the kernels and the oil has exploded. The consequences have not always been positive. Predictably, oil quality has fallen, while the communities are seeing a loss of control over the production and marketing chain, intense competition among cooperatives and falling prices for the oil, leading to falling incomes for the workers. In addition to this, the argan forests are suffering greatly. Over-exploitation of the trees, which not only provide the precious oil but also play a key role in local livestock farming, plus drought caused by climate change, mean the forests are increasingly fragile and vulnerable and at risk of depletion. This would be a catastrophe for the communities and for all of us: The endemic forest is essential to protecting the whole region from desertification.

We have been aware of this situation since 2001 and are trying to help in our own small way, with a Slow Food Presidium for argan oil to help support its millennia-old culture and this invaluable ecosystem. Initially established to support argan oil produced using mechanical pressing, now the Presidium works to safeguard oil made by hand, following the traditional method based on ancient knowledge. 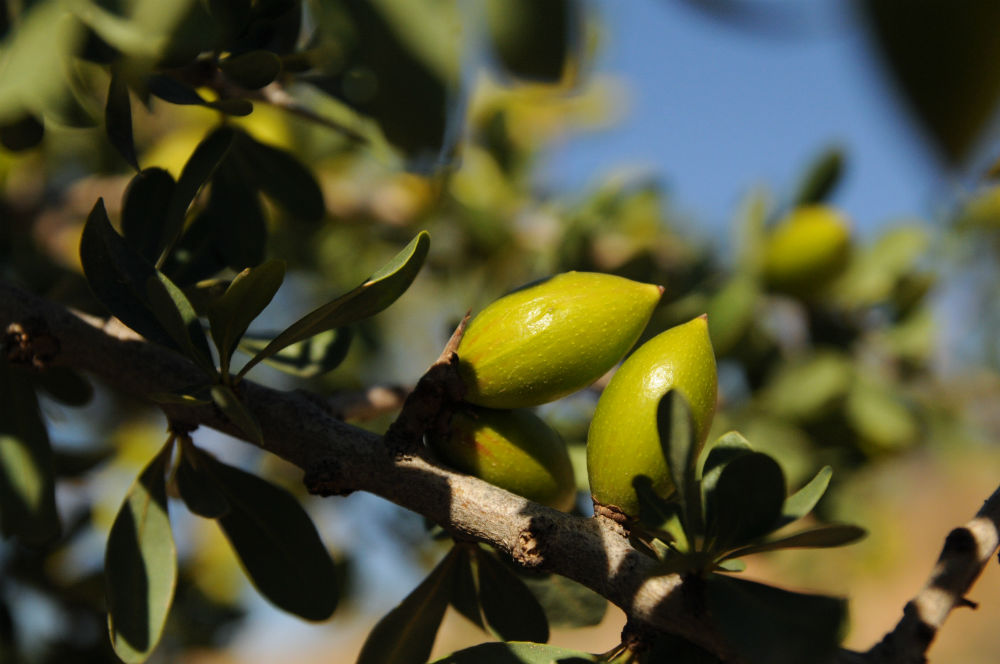 “The women complain about the effort needed to produce the artisanal oil, but for me it’s a sport that’s good for body and soul.” Hafida, whose name means “she who protects” in Moroccan Arabic, has a profound respect and love for argan. As well as the secrets of the production process, her grandmother also taught her the social and environmental importance of this tree, values that she is now seeking to pass on to the women of the cooperative. “Everyone here must know that the people who are capable of working the argan, who know it and who turn it into oil, are rare. And they are the ones who keep the argan tree alive. It’s important that they recognize this responsibility and protect this marvelous forest.”

FAO has now recognized the Argan-based agro-sylvo-pastoral system within the area of Ait Souab – Ait Mansour as a Globally Important Agricultural Heritage System (GIAHS) for the valuable role the agro-pastoral communities play in maintaining the forest, local biodiversity and the entire agroecosystem and its landscapes. It is essential to raise the profile of the unique knowledge and agricultural practices that make this system a source of inspiration and innovation when it comes to our resilience to the challenges of the present and future.

It is with this idea, with the objective and shared desire to safeguard this agro-cultural area and its precious knowledge for all of humanity, that Slow Food and FAO are joining together to celebrate the International Day of the Argan Tree, named this year by the UN General Assembly as May 10.