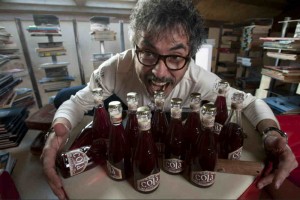 The Baladin brewery began as a brewpub in 1996 in Piozzo, a small town overlooking the Langhe region in Piedmont. It was opened by brew master Teo Musso, owner of a pub with the same name since 1986.  The brewery is well known for a particular room that is covered in a circus tent. This décor is far from casual: in ancient French baladin means “story teller” and the idea for this unique business is based on a traveling French circus, and in particular on its founder François Bidon who is a very good friend of Teo. Today the brew master is known as one of the fathers of the craft brewing movement in Italy and as its standard bearer around the world. Even though he has opened locales all over the world, he still hasn’t forgotten his respect for quality ingredients and the importance of craftsmanship. His encounter with Slow Food was thus inevitable, as was their sharing of a common path: from events (Salone del Gusto and Terra Madre, Cheese) and the Master course in brewing at the University of Gastronomic Sciences, to the creation of Baladin Cola (an all natural beverage made from kola nuts from the Slow Food Presidium in Sierra Leone).

“I owe a lot to Slow Food and to my friend Carlin”, he tells us. “The history of my brewery has often intertwined with Slow Food initiatives. The association was among the first groups to believe that craft brewing was possible in Italy, taking concrete steps to support the spread of its culture. When I started selling my beer outside of Piozzo, I bought a Slow Food guide to choose the restaurants to send samples to, assuming that since these were places chosen by an authoritative non-profit entity they would be open to new food and cultural experiences, which is precisely what I was offering.

These days my relationship with Slow Food is better structured but the goal is still the same. We have produced a Cola with an African Presidium that we’re very proud of, and we support initiatives thanks also to the positive responses that Baladin fans have given to our proposals. What’s more, we have now created a limited edition of bottles labeled “We Feed The Planet” that are sold during our event (the Baladin Open Fest in Turin) whose aim is to contribute to supporting this great initiative.

Today Baladin has chosen to support one of Slow Food’s most ambitious projects: the creation of 10,000 gardens in Africa. The company’s contributions will be given to four gardens: two in South Africa (Mawisa and Mvuleni community gardens) and two in Morocco (the Anasr Ain Aouda and Iben Zaydoun school gardens, in Skhirat).

“I produce in Italy because I believe in my country and in the fruits of its soil,” he continues. “I am, however, tied to Africa by my love for that continent, which I have visited many times. My partner is African and one of my favorite beers is made with spices that are reminiscent of the intense aromas of Morocco. One of my projects for the near future is to set up a Baladin brewery in Africa; this will not be a place to produce beers that are already well known, but rather a place to make new ones dedicated to Africa and, hopefully, to its agriculture”.

“Supporting the 10,000 Gardens in Africa project is a fundamental step in a path of personal growth and awareness for my company. With the Cola we wanted to let people know what’s behind the authentic version of the most globalized drink in the world: what the fruit is that gives it its name and where it comes from. This is why we chose to hazard the amaranth color, despite the fact that it is different to a drink that we usually see in a completely different way. The gardens, on the other hand, are first and foremost a personal satisfaction, though I hope that in the future they can be the start of an active collaboration, which will eventually help increase job opportunities for the farmers who take part in the project”.

Check out the gardens that Baladin is supporting, find them on the map and support the Slow Food project for yourself!