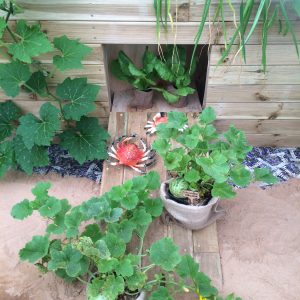 The Ark of Taste came to the biggest annual flower festival on earth in early summer.

Held at the historic Hampton Court outside London, the festival, now called a Garden Festival, drew around 140 000 people over five days.

By amazing coincidence, the design of the wooden Ark, festooned with vegetable plants, was by a young student called Noah!

Noah’s design and its message were such a success that they won a silver award and was featured on BBC television. Paolo drew attention in the TV coverage to the over 90% loss of our edible biodiversity and what to do about it. 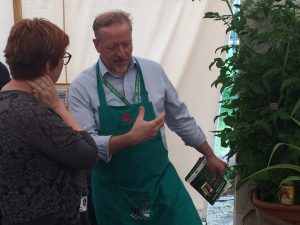 Many of the crowds who flocked to see this living Ark of Taste had seen it on TV and were keen to know more.

Volunteers from Slow Food were on hand to tell the story of the Ark and of Slow Food’s role in defending the world’s quickly-disappearing bio-diversity. And best of all, there were traditional seeds from Franchi Seeds for visitors to buy and take away and grow as a small stake in the future.

On-board the Ark were historic Italian varieties like Bergamo Escarole, and the Saluggia Bean from Piedmont which dates back to at least 1535. Hailing from France and now only grown by a single farmer, Laurant Berrurier, near Paris, came the Paris Market Carrot. There was also corn from Mexico, and San Marzano tomatoes.

The Ark was a great show-stopper and conversation starter, and as Carlo Petrini underlined, “Projects like this help people realise that biodiversity is not a difficult concept to understand, something just for scientists or professionals, but instead concerns our food and our everyday lives.”

For more information about the living Ark of Taste and Franchi Seeds of Italy, please contact Shane Holland at Slow Food in the UK.